Race for the Cure

On May 3rd, the annual Susan G. Komen Breast Cancer race was held in Las Vegas. There isn't a race for uterine cancer research and so I enjoy participating in this event. It is a pretty big deal with our high school and I have walked with Durango's team for the last three years. The school really gets into it and we have around 300 students, teachers and parents that walk on behalf of Durango. 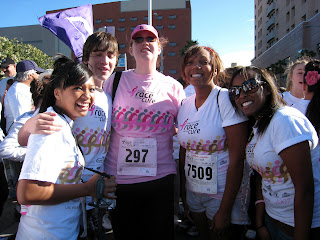 This year, like usual, I headed downtown (Freemont Street) to participate in the race and I had a couple of students with me. We were talking about the event and who was going to be showing up when they spotted the Durango group--both of them ran across the street to meet up with their friends. Never wanting to be left out, I hurried after them across the street.

As I was dashing across the street I ran through the planter bed in the middle of the road. I was so caught up trying to avoid the plants that I missed a very large, metal half circle that rose about 6 inches from the ground and surrounded a light. Although my eyes missed it, my feet certainly did not. I ended up spread eagle, face down with half my body still in the planter box and the other half kissing the road. My initial reaction was of extreme embarrassment, because the Durango team was directly in front of me. Of course, I jumped up and tried to quickly dust myself off, while trying to maintain some semblance of pride. I didn't check to see if all the students were laughing, but I felt as if they were.

Al La Rocque, a fellow colleague, rushed up to see if I was okay. He was so sweet, helping to dust me off, asking if I was alright. Our principal and a couple of other teachers also hurried over to check my status. Other than the stabbing pain in my left arm I was fine. Initially, I wanted to stay and still participate in the event, but Al was positive I had broken my arm. He escorted me to find the first aid booth. The paramedics wrapped my arm in a sling and gave me some ice and then I headed off to the emergency room.

Fortunately, my roommate Tiffany, was still home because she met me at the hospital with my insurance card and a book. While in the emergency room, I was seated next to a gentleman who had the same injury as mine (broken left arm), he moaned, cursed and yelled at the doctors the entire time complaining about his pain. At one point he turned to me and asked why I didn't appear to be in suffering. I told him that on the scale (1-10) of painful physical impairments I have encountered this only ranked as a 3. He did have a much better story for his injury than I did (he was mugged).

Four hours later I was bundled up, given my prescriptions and I was finally able to go home. Since that accident, my arm was in a cast for 2 1/2 weeks and then a split for 3 weeks. The only complaint I had about the entire event--was the inconvenience. It is challenging only having the use of one arm for 4 weeks. Right now I am not using anything and for the most part there is virtually no pain. I am still getting full mobility of my wrist back, but I am doing good. I don't have many pictures of me with the broken arm, but here is what I have. 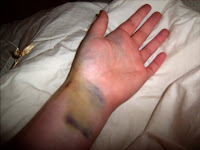 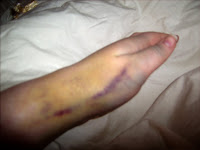