First Time was a Great Time...

second time was a blast.

Well, I am just back from the concert and I am a little deaf. There is nothing quite like the sound of 10,000 women shrieking their heads off. Even though I had the foresight to wear ear plugs, the noise was so loud that me ears still kind of hurt. But the pain was totally worth it. Now, what you have all been waiting for....a recap of the night.

4:30 p.m.
I got a 5 star ticket to the concert which entitled me to "meet and greet" the guys before the concert. Earlier in the week I received an email that informed me that I was to show up at the theater by 4:30p.m. to pick up my tickets and get ready for the pre-show party. I thought this was ridiculously early and I wasn't wrong. The concert was held at the Mandalay Bay events center which is a nice location, smaller than most large venues. I was very surprised that there were at least 200 people waiting for their 5 star ticket. I didn't think there would be quite so many people.

5:30 p.m.
After standing in line for an hour, they finally gave us our tickets and we were escorted to a little (and I mean little 10 x 30) room for our pre-show party. Fortunately the hour in line was not wasted. I brought with me some essays to grade and I stood and read them while waiting...always the teacher. Once in the room for the party I was again surprised, not only by the size of the room but also the quality of the refreshments. We received 2 drink tickets (yeah for water!) and there was a cheese and crudite platter. So much for dinner :-(

6:52 p.m.
Finally we were called into line to "meet" the guys. While at the Boston concert I stopped two women to see what the 5 star package included and they showed me pictures they had taken with the guys and things that they had autographed and so I was anticipating the same sort of action. Wrong again. We were ushered into another line and then pushed into a small cordoned off section of the main party room where the guys were.

Danny greeted us first and I got the hug I have been waiting 18 years for. I then hugged Jonathan and Jordan. I gently patted Joe's arm, but didn't get a chance to even make eye contact with Donnie. Another woman had gone in sobbing and had monopolized him the entire time.

They quickly called for our picture and I got into a weird crouching position and smiled. I also assumed that the picture that would be taken at the event would be done by professionals. (We all know what happens when we assume things) What we got was two women with small digital cameras. I should find out in the next couple of weeks where I can download my picture. When I find out I will post it.

6:54 p.m.
Meeting was over. I had been fretting for the past couple of weeks about what I was going to say to the guys. I wanted something memorable and not too cliche and I thought I had it ready to go, only to discover there was no time for me to even say anything more than just "Hi." Although time flew by very quickly, I noticed a couple of interesting things.

One, the guys are tiny. Not only shorter than I realized but also, much, much thinner. I could throw them around...seriously.

Two, they were very nice and much better looking than I thought possible. Seriously hot, all of them. Danny was always my favorite, but Jordan is more attractive than any man has a right to be. See the shirtless picture of him at the bottom from his Baby, I believe in you solo.

Alas, there was not time for that elusive Danny and Krista shot, or the autograph from Joe I had wanted to get for Chandra. We were pushed out and another group of ten women were escorted in for their 4 minutes of paradise.

I have to make a little side note. During this entire time, I met three hilarious ladies from Albuquerque. We laughed, shared stories from our earlier New Kid days and generally tried to make the time pass quicker. It was a serendipitous meeting...Jessica, Lisa and Christy...you girls rock!

7:54 p.m.
Find seat. My ticket was listed as Section 2, Row P, Seat 11. I knew that section 2 was the front middle section on the floor. I assumed P meant that I was sitting about 16 rows from the front, which would have been almost identical seats to the concert in Boston. Much to my delight, they did not start lettering the rows at A and P ended up being only 7 rows from the front. SCORE! These were the closest seats I have ever had at a concert. I could clearly see the sweat coming down their faces all night. What more could a girl want. :-)

8:00 p.m.
Lady Gaga takes the stage. She is a strange performer. I like her music, but she's a little off. At the Boston concert the first act was a guy named Colby O'Donis...good music as well. 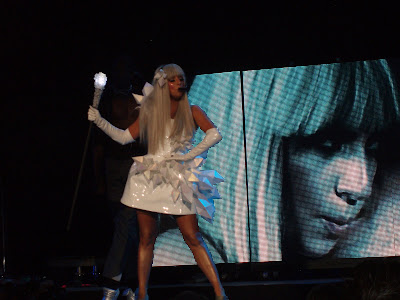 8:25 p.m.
Natasha Bedingfield. She sounded better much better in Vegas and I enjoyed how she switched up her set from the show in Boston. It just seemed more pulled together. 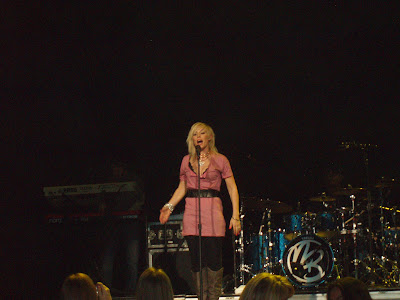 9:15 p.m.
NKOTB time! Oh, oh, oh, oh, oh....they still have the right stuff. I borrowed my brother Scott's camera for the event, but 5 pictures into the first song the battery died. I didn't get the opportunity to take any more pictures from my good seat, but that is just fine. I was able to concentrate on trying to remember every dance move, head nod and smile. I won't go through a minute by minute recap of the event...although I could, but instead here is the set list.
*****
At this part in the show, they switched to a little round stage near the back of the floor where they performed the next three numbers.

Ok, so with everything else I have discussed, the long lines the limited time with the guys all I have to say was that the show was AMAZING! They sounded awesome which was a pleasant surprise. All of their vocals were spot on. Jordan still managed to nicely hit his high notes and Joe's voice has matured well. They used a nice mix of old and new songs. Their most recent album The Block has some great club hits which my students really dig. It also contains far more sexual material. I could do without a few of the songs - as a whole though it is a nice new sound.

There were many favorite moments from the show, but the dancing was tight. The guys looked half their age and Danny did some break dancing which is impressive noting that he is almost 40.

With multiple outfit changes throughout the evening, the guys ended the show wearing Boston Celtics jerseys emblazoned with their last names, while performing "Hangin' Tough." Florescent strips of confetti fell to the ground much to the delight of all the screaming fans. I definitely felt like I was reliving 1990.

Both Vegas and Boston had almost identical shows, however, at their Boston concert there was a lot of talk about reminiscing and how good it is to be home. Donnie even appeared to get chocked up. There was none of that type of sentimentality in Vegas. It was all about the partying. In fact the New Kids were having a follow up party at LAX in the Luxor to celebrate. I opted not to go. Let's be honest, I am not the agressive-in-your-face-type of fan who would get more face time with the guys. It would consist of me sitting there, nursing a bottle of water, and watching the guys from afar. Better to go home and get to bed.

Enjoy the couple of pictures I managed to get. Even though I was a little disappointed at a few items, I would do it again in a heartbeat. The 30 seconds hugging the guys - made all the difference. 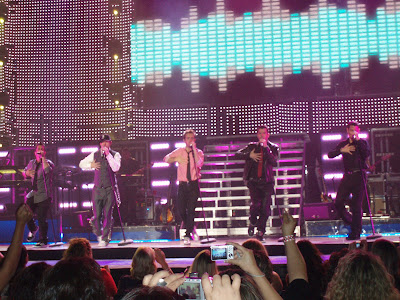 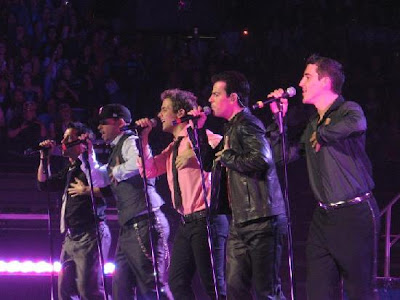 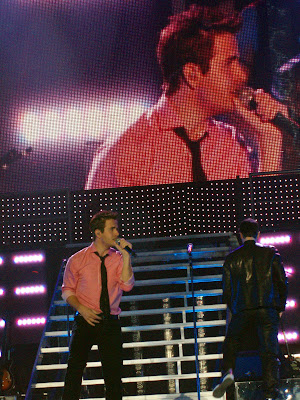 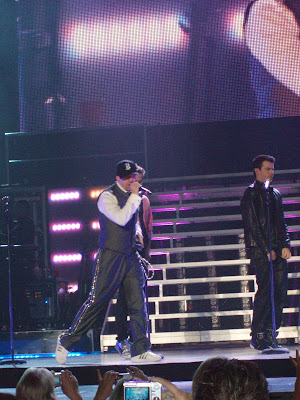 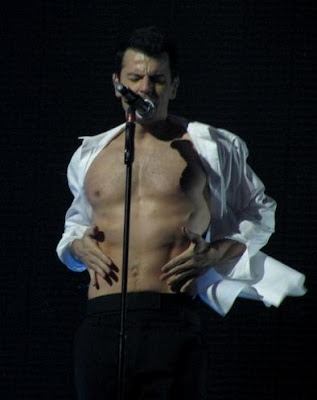