My spring break trip to Japan turned out to be absolutely phenomenal. Before every trip I spend a considerable amount of time thinking about what I can expect and what my reaction is going to be. This trip so far exceeded my expectations which turned out to be a lovely surprise. Although I could write a small saga on everything we did and saw. I am sure it would be more interesting for me than you, so I will try to keep to the essentials. I took around 900 photographs...most of those of the extraordinarily gorgeous cherry blossoms, but the pictures don't even begin to communicate what it was really like.

Knowing that my students would regale me with a thousand questions, I came prepared with my camera(s) and my notebook.

Scott got his first taste of what it is like traveling with me. I believe he had a great time, but he mentioned that he had never seen so much on any of his prior trips to Japan. When I plan my travel I try to be as detailed as possible and pack the days with as many different activities/museums/sites as is reasonable. Because I travel with a very limited time frame and I want to get my money's worth. This trip was no different. We visited Tokyo, Kyoto, Nara, Kurashiki and Kanazawa. Each place was beautiful and I loved them for vastly different reasons. Tokyo was efficient and really modern. Kyoto was packed with site after historical site. Nara housed the most beautiful Buddhist temple. Kurashiki was a charming, small town (200,000 people...small for Japan) with a beautiful canal and a noticeably slower pace of life, and Kanazawa had the incredible "Ninja" Temple, gorgeous gardens and tiny buses (see picture below). 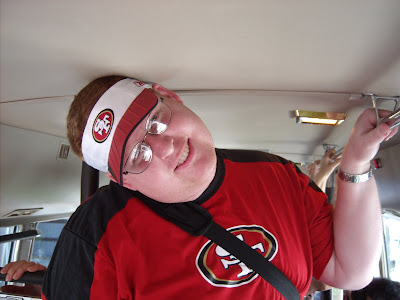 Two funny/interesting stories of our trip:

Scott has this shirt that says "looking for a Japanese girlfriend", but it is written in Kanji. He enjoyed wearing this a couple of times and always got a ton of looks. Teenage girls especially liked it. However, whenever someone would read it they would get a little smile on their faces and then turn and see me. As soon as the person would see me they would frown and think that Scott was disrespecting me. Of course, when you see an adult man and woman traveling together the assumption is that they are a couple. He explained a number of times that I was his sister and so it wasn't a problem, but I wished I had a shirt that read "this is my brother" with an arrow and it would have solved many unasked questions.

Here is a picture of the two of us in front of the largest wooden building in the world. It houses the largest Buddhist sculpture in the world. You can see the man giving Scott the dirty look after reading his shirt. (Nara, Japan) 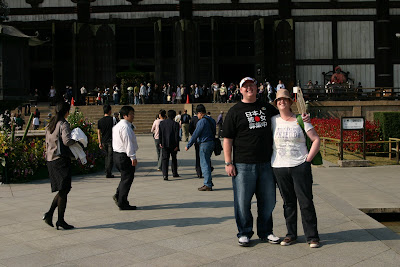 The evening of April 8th we were wandering around Kyoto after dinner in the Geisha district looking for Geisha. I really wanted to take a picture of one (there are only 300 in Japan today), but we were having zero success. As we were walking back to the main road to hail a taxi, I noticed a wallet on the sidewalk. Scott picked it up and discerned that it belong to a Japanese person. I was concered about protocol and told him to go into a nearby business and ask them what we should do with it. His response to me was "let's just find a mailbox and put it there." I thought this was a ridiculous idea and felt it needed to be given to a police officer. Scott continued to assure me that "mailboxes are where wallets go...the postman will deliver it the owner's home." Needless to say I continued to disagree with him. Finally we saw a Japanese man whom we stopped asked. He instructed us to take it to the nearest Police box. Fearing we would get lost in the myriad of unnamed streets he lead us. We got to the first police box and it was empty and so he took us to another one.

We were lucky at the second location and there were four officers present who appeared as though they were having a slow night. The lost wallet got LOTS of attention. The nice business man who had spent a good 1/2 hour wandering around with us spoke with the police and let them know the area it was found and then left. The police officer in charge then donned a pair of black leather gloves and with the most delicate of touches started to take items out of the wallet while another officer was asking Scott a thousand questions. During the questioning the missing wallet's owner just happened to stop by to report his wallet was lost. (Happy coincidence!) The police then interrogated him on everything in the wallet (color, name each card, where did you lose it, at exactly what time did you realize you lost it, exactly where did you realize you lost the wallet), of course with all this questioning they had already confirmed identity from one of his id's, but that didn't slow down the torrent of question. The young man was very grateful to Scott and when Scott assured him that it was no big deal one of the officers very intently informed Scott about his rights. Apparently, when a wallet is lost the finder is allowed to negotiate for between 5-25% of the contents value as a reward. Once the young man had finished filling out the numerous pages of the police report (all for a lost wallet!) he humbly turned to Scott, thanked him again and asked what he could do to show his gratitude. Scott wasn't about to accept any money and declined any monetary reward. The officers made Scott acknowledge that on the police report and sign it before we were finished. When he exited the building all he said to me was "see, I told you we should have just put it in a mailbox"

(All of this was spoken in Japanese and Scott filled me in on all the details after it was over.)

Here are a couple of examples of Japanese mailboxes. For the rest of the trip whenever we passed a mailbox Scott would say "a mailbox...that's where wallet's go." 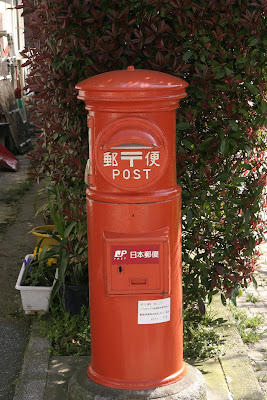 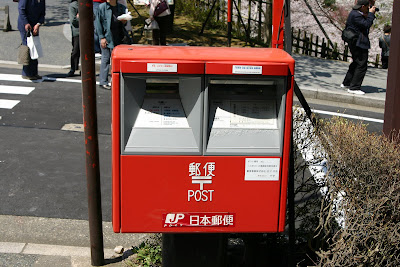 Scott's suggestion for the title "Egg Salad" was due to the fact that he ate about 4 egg salad sandwiches a day (I would have 1). Funny thing was, they kept them sealed on the shelf (not the refrigerator section) and I thought that they would be toxic because of the mayonnaise, but they were actually very good.

I will post a few additional stories and some of my observations on a later post.
Posted by Krista at 9:47 PM