With my move to a new school next year I have been frantically packing up my classroom and taking everything home. This transition for my students has not been easy. In fact I have seen a dramatic rise in poor behavior once I started moving out. On the flip side I have also seen more of them telling me how upset and sad that they are that I will be going.

Earlier this week I was packing some boxes after school and one of my AP students named Kevin came in. Kevin is my most brilliant AP student, in fact he helped make some of my podcasts this year and co-directed my study sessions for the AP test. Kevin came in to chat and was talking about how he wasn't going to be at school next week and as he was pacing around the floor he came up to me and thrust this long wood thing in my face. He said "I just wanted to give you a gift before you left." I was so surprised, because this is not his typical behavior. The gift was a beautiful fan from China. (Kevin is Chinese) On the back of the fan he pointed out there were two poems that he and his mom translated. I have typed the translation out below. It was really sweet and once again I was surprised by his display of affection.

The next day as a group of students were helping load a box of stuff into my car, my student Patrick said "I'm really going to miss this class." I am too Patrick. 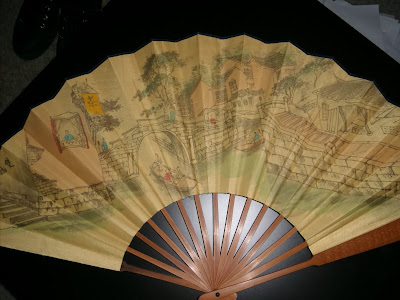 Front side of the fan. 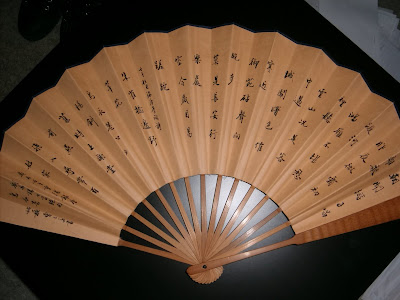 Poem #2 by Li Wan
Travelers in the morning sun sing songs of departure
Thin frosts pass the river in late evening
The geese cannot endure the sadness of the songs
Cloudy mountains bear witness to passing travelers
Bare stone walls and the color of dawn welcome the coming winter
Soft voices resonate throughout private gardens
Is it possible that this may be a place of happiness?
Though their happiness may be meaningless perhaps it eases their lives
Posted by Krista at 10:02 AM