At the end of last school year I applied and was accepted to be a member of the Social Studies training cadre with our school district. What this means is that I present some of the professional development trainings for our school district over the course of the year. I wasn't sure how much time it would entail once the school year began, but I definitely found out in October.

In our first meeting together as a cadre in August we all volunteered and signed up for the trainings we were interested in conducting. Never one to back down and realizing I only get paid for what I present, I volunteered for as many opportunities as I could. Translation, in October I had trainings at least 2 if not more times a week. It was very, very tiring. I really enjoy teaching adults (sometimes even more than teenagers) and the feedback I have been getting from those in attendance at these trainings has been positive--but it does take up a good chunk of time.

With the overwhelming time commitments in October, whenever I had a free moment I was either unpacking boxes or preparing for my regular classes. One of the highlights of the month was Durango's homecoming football game. I decided I needed to see my old school and hopefully run into some of my former students. The game was great and Durango had an awesome team this year. During the first half four of my former AP students (all boys) came and sat with me and we chatted and laughed the entire time. I don't think anyone of us actually watched the game. They kept telling me how glad they were that they had stuck with AP and how much they enjoyed having me as a teacher. While we sat there a number of my other students came to say hi and it was really great to feel their love.

During half-time we watched the homecoming royalty and I realized I had taught all but two of the kids. It was excited to see how they had grown up. After the game more of my students wanted me to join them for yogurt and we headed to Yogurtland (yummy!) for more chatting and laughing. I felt like I was crashing their party, but it was still great to hang out with them.

My car this month was also going through what I believed to be the early stages of death and so I decided to spring for a new car. I bought a 2010 Hyundai Elantra. It is nice car and I have enjoyed cruising around town in it. I love the fact that it has a USB port for my ipod. Here is a picture, although my car is white. 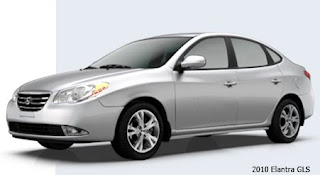 The end of the month arrived with one of my personal favorite holidays (NEVADA DAY!) which is celebrated the last Friday of October. It was a day of resting due to a massive headache.

For Halloween, Scott, invited me over to his friends house who makes really spectacular costumes. This year's theme "Phantom of the Opera." She had decorated her backyard and made costumes for the principle characters. Her friends must really love her, because in addition to posing for pictures in the costumes, they also recreated many of the most popular scenes from the musical (singing included). Scott (played Raul) sounded great as usual and it was fun to see adults letting loose and just pretending. 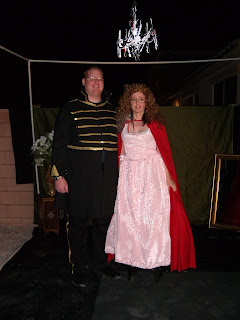 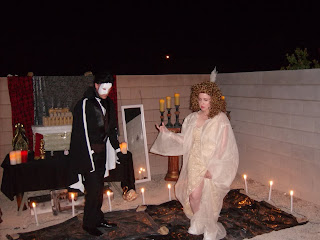 Melissa (playing Christine) and her husband as the Phantom 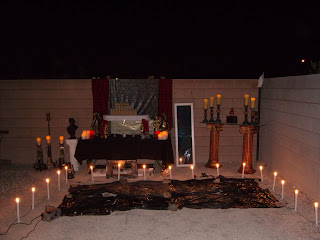 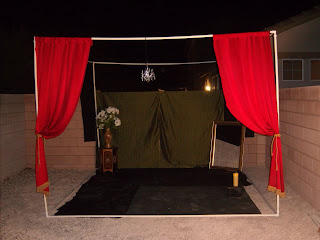 The Opera house
Posted by Krista at 5:40 PM